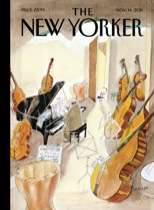 November 14, 2011: “Miracle Polish” by Steven Millhauser
The good news is that this week’s story is available for free online. And it’s worth reading. I certainly found myself completely engaged to the end, as I almost always am with Millhauser’s work.
The first person story is about a middle-aged guy who buys some “Miracle Polish” from a door-to-door salesman because he feels sorry for him. The narrator puts the stuff in a drawer and forgets about it until one day he sees a smudge on a mirror. He ends up polishing the whole mirror and what he sees amazes him: “There was a freshness to my image, a kind of mild glow that I had never seen before.” He polishes the other mirrors in his house, and feels silly for being tricked by the polish. His girlfriend comes over and sees it too. The guy gets more mirrors and polishes them all. He’s not only a little compulsive about it, but he thinks of the reflection as somehow separate from himself, and Monica’s from hers. Monica is a bit jealous of her own reflection.
They go on a picnic, which seems to be glorious. Millhauser emphasizes the sunlight—Monica’s blouse has a shimmer to it, she takes her hat off and lets “the sunlight ripple over her face”; a jewel sparkles in her earlobe; she “takes in the sun with closed eyes”. Thanks to the bright sun, then, she seems to have become the woman in the mirror, instead of the dark, tightly wound woman she usually is. But the sun has a different effect on the narrator—the glare of the sun on the water hurts his eyes; the heat is oppressive; he feels despair. But he feels better, oddly, when he sees their reflection in his mirror back home.
Then comes the ultimatum. He must choose between Monica and her reflection. He worries about it and then makes his decision, even though he believes that the reflection is the true Monica, the “hidden Monica.” He thinks, “I was able to see in the depths of those mirrors, the world no longer darkened by diminishing hopes and fading dreams.”
And the story rolls along to its climax.
But what does it all mean? It’s a bit of a fairy tale, it seems to me, in which the narrator learns a lesson about letting the light into his life. But the lesson gets muddled by Monica’s reaction, and the fact that when real life gives her light—on the picnic—she seems to come alive. The light that the narrator sees, though, is artificial. He learns a lesson, but it seems to be the wrong one. And he pays a price.
Another interesting story from Millhauser.

2 thoughts on “>The New Yorker: "Miracle Polish" by Steven Millhauser”