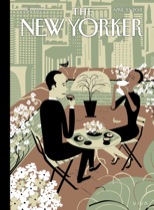 April 23, 2012: “Miss Lora” by Junot Díaz
Read the story—its available for free online—and then read the Q&A with Junot Diaz, which is at least as interesting. Díaz has a distinct voice, especially in this character of Yunior, whom we’ve seen in his work before. In this story, Yunior’s older brother has died and Yunior, who is sixteen, begins sleeping with Miss Lora, and older woman in the neighborhood.
There isn’t much of a plot, really. The relationship progresses in secret and Yunior goes off to college. And that’s about it. But what’s really happening is that Yunior is growing up and coming to terms with his brother’s death and also with who he himself is. On its own, I don’t love the story, but it’s a nice complement to the other stories that, I gather, will be in a new collection later this year.
One thing I don’t like about this story is the point of view—second person. Díaz says in the Q&A that he knows he’ll lose some people with this approach but that it was the only way he could write it—first person was too close, third too distant. I do believe that second person is sometimes justified. If the speaker is identified and is separate from the “you,” then that is really just a first person dramatic monologue addressed to a second person. More often, however, the “you” and the speaker are the same person—the narrator is speaking to himself. In that case the POV is justified if there is some reason why the narrator is stepping outside of himself—some trauma or life event that, in effect, splits him into two. Jennifer Egan did that well in Goon Squad, Lorrie Moore has done it effectively, but usually I don’t see the justification for it. Here, one could argue that the split is caused by the double-whammy of Yunior’s brother’s death and the life-altering affair Yunior has with Miss Lora. But I don’t think these events are portrayed so traumatically, and so for me the second person doesn’t work.
I don’t know anyone who cares about this as much as I do, so I doubt there will be too many other objections to the POV of this story, despite Díaz’s own expectations.

2 thoughts on “The New Yorker: "Miss Lora" by Junot Díaz”