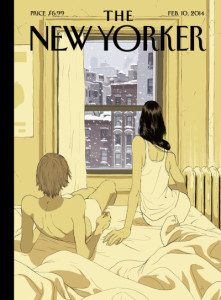 I enjoyed this story, and also enjoyed the Q&A with Zadie Smith which sheds interesting light on her process. (I especially like her admission that the title, and its reference to the painting owned by the story’s main character, came late, after The New Yorker rejected her original title.)

In the story, a storm has just devastated an unnamed country. The Minister of the Interior, having already sent his family ahead to Paris, is fleeing with, among other possessions, an expensive painting. The trip to the airport is difficult, and along the way he and his driver encounter an escaped convict (the prison having been destroyed in the storm). Through the mechanism of this convict, known as “The Marlboro Man,” much of the Minister’s past is revealed. This past is familiar to anyone who has observed governments in developing countries. The Minister isn’t completely heartless, but he is corrupt, and he knows he’s leaving his people in the lurch.