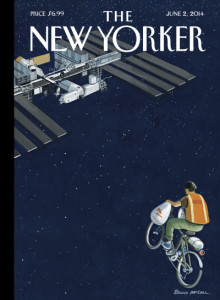 I’m still getting caught up on the 2014 stories and hadn’t read this one yet, so it was a funny coincidence that last night in a class that I teach in Charlottesville, VA, one of the students said that she had seen Thomas Pierce earlier in the day in a coffee shop. Pierce lives in Charlottesville, but I don’t think I’ve met him. I discussed his previous story in TNY here: Shirley Temple Three. So this afternoon I opened up this issue of TNY and there is the story by Pierce.

And I liked the story very much. One reason I liked it is that we are dropped right into the action without any explanation. We figure it out eventually, with the aid of some brief flashbacks, but we’re on our own at first. Brooks and Mary are in a pantry. Why? Because there are some dogs they’re hiding from? Brooks is a little slow? Why? Because he’s had some kind of traumatic brain injury (which we learn, in a flashback, was the result of a random act of violence). And as the story progresses we learn also that Mary has come here to her ex-lover’s home to retrieve a sex tape that she foolishly let him film.

Will they find the tape? Will they escape the dogs? Will Brooks recover? Will Mary recover from the embarrassment of the tape? Some of those questions are answered, at least. (Hint: the title is the code word to stop the dogs from attacking.)

In the Q&A with Thomas Pierce we hear more about the idea of personality changes, which Brooks has undergone because of his injury. There also has been a change in roles between Brooks and Mary, with the latter now taking care of the former, where once it was the other way around.

Pierce’s story collection came out not long ago, including both of his New Yorker stories: Hall of Small Mammals: Stories