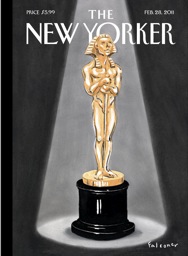 First, let me say that my subscription to the print New Yorker has run out. Good riddance. I’ve been pretty good about getting through each issue in a timely manner—mostly because I take them to the gym and read them on the elliptical trainer—but they don’t always arrive. And they almost never arrive when they’re supposed to. So I’ve switched to a Kindle edition of the magazine. So far so good. (I was afraid I’d lose the cartoons, but, no, those are included.)
Second, this story is another one that isn’t available online to non-subscribers, I’m sorry to say. There is a brief interview with the author, which you can read here, but not the story itself.
The story is about the friendship between Dean and Roberto. Dean is white, blond, employed. Roberto is an illegal immigrant from Chile (having stayed in the country after his parents’ student visas expired). For a time, Dean is also out of place—he finds himself in a black neighborhood, on his way to visit Roberto in the hospital, and is nervous when three men approach him. Otherwise, Dean’s life is easy, but Roberto’s is not. He barely gets by, and he often needs loans from Dean. Dean comes through, but begrudgingly. At one point, Roberto reminds him that Dean is “opulent” but Roberto is “indigent” and Dean has to admit that his friend is right. And, of course, Roberto always has to worry about INS.
Three other interesting features here: Roberto’s landlord is a heavily accented immigrant from somewhere, Dean’s not sure where: “He was either Italian or Greek or Armenian—we could never figure out which—and he had been in America for fifty years but still could hardly speak English.” The guy doesn’t care much for Dean, but he’s very fond of Roberto. And the story is told against a backdrop of America preparing for war. Where and against whom isn’t clear, but the preparations stir up a patriotic frenzy and by the end of the story the war has begun. And Roberto himself is a puzzle. He works out and so he has an amazingly developed upper body, but he’s neglected his lower body; it’s as if we’re being given more evidence that he’s supposed to be less than a whole person.
The story, I think, deals with the American experience of the “other”—Dean’s relationship with Roberto (it doesn’t really feel like friendship, to me) the half-developed illegal; Dean’s apprehension at finding himself in a black neighborhood; Dean’s interaction with and perception of Roberto’s landlord; the foreign war against an unnamed enemy, the identity of which hardly matters to the people who arrogantly assume it will be over in a matter of days.
There’s not much of a plot here, honestly, but there are many intriguing layers and it’s rewarding to peel them back.
February 28, 2011: “Paranoia” by Saïd Sayrafiezadeh