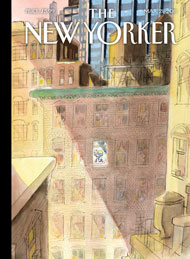 Ben Marcus has a new novel coming out next year, The Flame Alphabet, but from what I’ve read about that book, this story doesn’t seem to be an excerpt. Which is good. Because I liked it a lot, in a horrified, angry sort of way. Sorry it’s not available online to non-subscribers. It’s a really good read.
The point of view character is Mather. (Surely it’s not accidental that ‘Mather’ is a combination of Mother and Father, given how the story unfolds.) He shares custody of Alan, an asthmatic 18-month-old kid, with the boy’s mother, Maureen. The reader doesn’t even meet Maureen until well into the story, when Mather has gone to her apartment for the “handoff” of Alan. Single-parenthood with a kid like Alan seems especially tough. He needs a special humidifier. Alan doesn’t have a car so he has to take Alan in his carpool to his workplace where Alan spends the day in the nursery. Except when the carpool doesn’t show up and Mather has to take Alan on the bus. Except when the nursery is inexplicably closed and Mather has to take a personal day off in order to take care of his son.
When we first meet the mother, she asks Mather to keep Alan for a while because she and her boyfriend are going off on a trip. Off they go, and Mather doesn’t complain, because he doesn’t want to be the kind of guy who complains. But Maureen doesn’t come back, and doesn’t call, and the nursery is closed, and Mather doesn’t know what to do. Meanwhile, he’s having problems at work—some temps are using his cubicle, and his boss speaks in riddles. (The writing is clearly on the wall, but Mather doesn’t see it.) During a crucial conversation with the boss, the baby sitter calls but Mather doesn’t understand what she’s saying, so he leaves work, takes the bus home, and finds that Maureen and her boyfriend are taking Alan away, and Maureen is furious at Mather for leaving Alan alone “with a stranger.”
It’s all so unfair, and the reader expects Mather to explode in rage. (And he does, briefly, at one of Maureen’s friends, whom he’s called to find out where the hell she is.) But he just takes it.
The story, told in the present tense, is fast-paced, and although it’s long—especially compared to last week’s story—it moves quickly. The title is surely significant. Mather gazes longingly at the neighborhood where he grew up, Rollingwood, and compares it to the treeless area where he now lives. In Rollingwood, it is always 3:15 because the school’s clocktower broke years ago, so school is always out. A kid’s idea of a perfect place to live. But that’s not where he lives now, it’s not where Alan will grow up, and he realizes that, in fact, he’ll have little say over where Alan goes to school. It’s all terribly depressing. But Mather has no choice but to go on this way, and so he goes home an prepares for Alan’s next visit.
March 21, 2001: “Rollingwood” by Ben Marcus