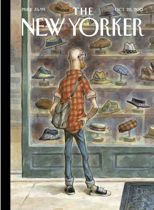 Okay. I guess. Here we have The Metamorphosis turned on its head. Instead of Gregor Samsa waking up to find that he’s turned into a roach, here the roach wakes up to discover that he is a human, someone called Gregor Samsa.

It’s clever. Samsa must get used to walking on 2 legs, wearing clothes, dealing with the hard-on he develops when the locksmith—a woman, the daughter and sister of locksmiths who because of the troubles cannot leave their home.

The story appears to take place during the Prague Spring, when a blooming of free expression and democracy was crushed by the arrival of Soviet tanks. But there’s no turning back, the story seems to be saying. The enslaved must get used to being human, because “the world is waiting for him to learn.”

The story’s a nice allegory that seems clear enough, I think. Just cleverness on the surface, but about much more—just Kafka’s original was about more than the bug.