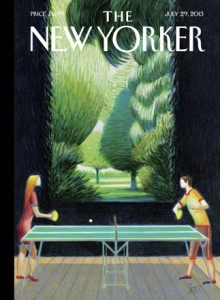 We learn from the Q&A with Daniel Alarcón that this “story” is excerpted from his forthcoming novel.  I guessed as much, given the rushed ending. But I liked the piece anyway. Interestingly, the work is related to Alarcón’s earlier story in The New Yorker (in 2008), “The Idiot President,” which I discussed here. That story, apparently, was part of a novel that the author later scrapped. However, the character of Henry, and his play “The idiot President,” was resurrected for the new novel. It’s interesting to read how writers like Alarcón approach their problem novels and how they can sometimes recycle their ideas in this way.

In any case, this “story” is about two men, Henry and Rogelio, who find themselves cellmates in prison for very different reasons. Henry is a playwright charged with terrorism for his play, “The Idiot President,” and Rogelio is guilty of drug trafficking. But beyond proximity, they have nothing in common . . . and yet, they become lovers.

The story is based on an actually prison in Lima, Peru (although the events, Alarcón stresses, are fiction). I liked his novel, Lost City Radio, and I’m intrigued by this excerpt, so I hope to read this new novel. But given that it’s an excerpt, I’m not sure there’s much scope for interpretation. Conditions in the fictional prison are very bad; life in prison is hard and creates strange bedfellows; political repression sucks. Is there more to it than that?