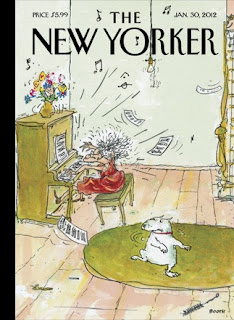 January 30, 2012: “Someone” by Alice McDermott
In the Q&A with Alice McDermott, we learn that this “story” is taken from her novel in progress, which, presumably, is the one the contributor notes tell us is coming out later this year.  Even so, it seems to work very well as a standalone story. It centers on Marie, a young woman in Brooklyn in the 1930s, who begins dating Walter, a man who walks with a limp. They begin to date—Marie’s clueless and Walter imposes himself on her—but things don’t work out.
Early in the story we know Marie doesn’t end up with Walter because she jumps ahead to the point in time where she tells her daughters stories about Walter, to the point that they’re sick of hearing about him. Presumably, in the novel, that’s an important element. In this excerpt we also see Marie’s older brother who has recently resigned the priesthood and moved home. He tries to comfort her after Walter breaks up with her, but he doesn’t do a very good job of it.
The writing is beautiful, as we might expect from McDermott. And for a “short story,” there’s enough plot. I sure hope more is going to happen in the novel, though, because feels like it might be a bit slow. Even McDermott, in the interview, worries about it being a “novel about an unremarkable woman,” and I think she’s right to worry. But she’s been there before and won the National Book Award, so maybe we’re both wrong.

4 thoughts on “>The New Yorker: "Someone" by Alice McDermott”