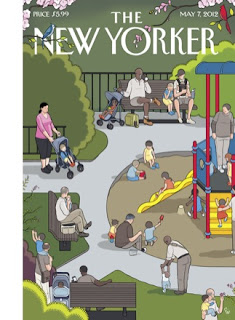 May 7, 2012: “Nero” by Louise Erdrich
See the Q&A with Louise Erdrich.
What have we got here? A mean dog who likes gingersnaps and lives to escape, whose will to live is defeated when the possibility of escape is removed. You have to feel sorry for the dog, as the story’s narrator seems to, in a dispassionate, cool sort of way.
And then you’ve got a neighbor who likes to beat up on suitors to his daughter, until the narrator’s uncle nearly kills him, and then his tune changes. The fight between the uncle and the neighbor is entirely predictable, and I kept hoping for a tornado or some other calamity to come and wipe out the town before we had to deal with it was obviously coming. (In fact, the outcome was so much expected that I was sure it couldn’t turn out that way, so that when it DID turn out that way, it was almost a surprise.)
Seriously, the only thing interesting here was Nero, the dog, and what happened to him was tragic. Oh, the chaos at the school with the escaped snake and the tarantula was amusing. And because these animals come in cages but find themselves temporarily loose, which is what happens to Nero the dog and also the uncle’s girlfriend, presumably we’re supposed to see some theme about the tragedy of constraint. Maybe.

Erdrich is sometimes enjoyable to read, for me. This isn’t one of those times.