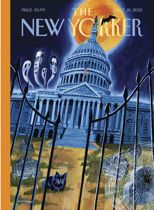 Alice Munro, a frequent contributor to The New Yorker, was awarded the Nobel Prize for literature last month. In tribute, presumably, the magazine ran this story, which originally appeared in the magazine’s issue of December 27, 1999.

Like many of Munro’s stories, it has a structure that is slightly off kilter. It begins with a brief section that takes place during the younger days of the two main characters, Grant and Fiona. The first section ends with Fiona proposing marriage to Grant and Grant accepting.

Flash forward about 50 years. Fiona is now 70 and showing signs of dementia. Reluctantly, Grant takes her to a home where she can be cared for. At first he isn’t allowed to visit, and when finally he is he discovers that Fiona has become attached to Aubrey, a gentleman in the home whose condition is the result of a mysterious virus.

We then learn that Grant was a philanderer in his days a university professor. It is perhaps because of some residual guilt he feels over this that he doesn’t seem to mind Fiona’s attachment. When Aubrey leaves the home, causing Fiona to spin into depression, Grant uses his charms to convince Aubrey’s wife to let him bring Aubrey to the home to visit Fiona. The ending of the story is a bit confusing, but it seems to be that Fiona, in a moment of clarity, realizes who he is.

And what’s the point of the story? That true love is what endures? That dalliances only have power over us if we let them? Because Fiona does seem to know that Grant has always been there for her, even when he was sleeping with other women.

Not exactly a feminist message, but maybe it is one about the power love.

A more thorough discussion of this famous story (including an explanation of the title) is available here.