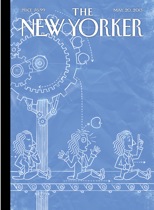 This story (available for free, so read it quick before they change their minds) started out well, I thought. But the ending seemed off, to me.

Julian is a young man with an autoimmune disorder seeking experimental stem-cell treatment in Dusseldorf, Germany. He has traveled to Europe with his girlfriend, Hayley, but they argued in the previous city and he has come to Dusseldorf alone. He waits at the train station for her every day and then goes off to get his treatment (which involves drawing blood, treating it, and then recirculation).

Two weeks go by. He’s staying in a cheap hostel for men in which he hears anonymous sex among the other residents at night. This, apparently, sets up the ending.

Julian is upset with Hayley for not coming. He’s upset with himself for spending his father’s money on the treatments (especially when he’s beginning to think that there’s nothing really wrong with him). And he’s feeling quite alone. Even the clinic cuts him loose when they decide there might be something in his brain causing the problem (which he interprets as “it’s all in his head”). So he’s feeling even more lonely and distraught when Hayley does, finally, show up.

And I don’t blame him one bit when he walks away from her. He’s kind of odd, but she’s treated him badly.

He goes back to the hostel and . . . he’s what doesn’t work for me . . . resolves to allow one of the other residents to come to him in the night.

Essentially, he’s so lonely that he’ll be happy with even this kind of meaningless touch. I was with him right until then. Maybe you don’t agree?