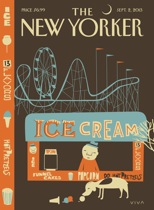 This story is free for the reading, so have at it. And it’s something of a mystery, as the Q&A with Robert Coover tells us, so a second reading might be in order. Or not.

Unamed country, unspecified time, characters identified by their roles (Colonel, Deputy Minister, etc.) and not their names. The effect is to suggest any country or every country, but also creates the timeless feel of a myth or folktale.

In this case, the Colonel has assembled a group of people in a planned insurrection against the President. But one member of the group is going to betray them, the President suspects. Who is the traitor?

Beyond that mystery, though, there are some wonderful bits of imagery to consider. The Colonel’s daughter is wearing traditional clothing—that somehow comes off and is passed around among the men to be examined. First the apron, then the vest, then the skirt . . . She represents the traditional past, apparently, and these men who are plotting to find a place in the future struggle to understand her. Then, too, there is the doorway. It’s a doorway to history, we’re told, but it’s also the doorway through which the future must pass.

There’s more here, and there is a nice rhetorical flourish at the end. What do you think?

1 thought on “The New Yorker: “The Colonel’s Daughter” by Robert Coover”