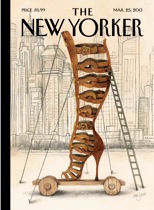 As of today, March 18, no Q&A is posted, so there’s no help there. I’m not sure we really need it, however, as this story, set in New Delhi, seems pretty straightforward. (You can read it for free on the website.) The Judge has just had his second heart attack, and so his mortality is on his mind. He tells his wife Binny, who tells their son Yasi, that he has kept a mistress for many years and has provided for her in his will. Binny isn’t outraged, at first, and finds it interesting, as if it were happening to someone else. She doesn’t like it much, however, when the Judge sends for the women to come to the house.

She gets angrier and angrier, revealing the traits that no doubt drove the Judge to the arms of another woman in the first place. Binny isn’t a very appealing character, but then no one in this story is.

But  then the mistress falls ill. At first, Yasi is sent to tend to her, but then Binny goes, and she actually seems to be showing some compassion for this woman who was taken from a brothel at age 15 and has known no other life.

So there is an element of class divide revealed in the story, and maybe something about a divide between Delhi and Bombay (Binny’s home). Other than that, I don’t think this story does enough work. Interesting beginning of something, maybe.