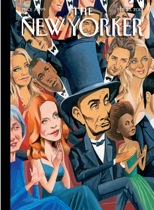 Having just read a pair of novellas by Theroux (“Dr. Slaughter” and “Dr. DeMarr,” published together under the title Half Moon Street), I was expecting good things from this story. After reading “The Furies,” though, I was disappointed because I found the main character so revolting. On reflection, though, the main characters of both of those novellas are pretty revolting, too, so in a way this story is of a piece with them.

Still, I didn’t much enjoy it. Ray Testa is a dentist who leaves his wife for his young office hygienist. He’s not too upset about and neither is the wife, and neither is the hygienist, whom Testa proceeds to marry. He takes her to his 40th High School reunion, which is a big mistake. He runs into several old girlfriends who recount how disgusting he was back then, and one of these women is in touch with the ex-wife, so she’s particularly offended by the new wife’s presence. After that weekend they go home and more women appear, revealing various examples of Testa’s bad behavior. The young wife finally gives up on the marriage, and tells Testa that he’s just like these old women who are angry with him. He looks in the mirror and realizes she’s right.

One thing noticeable in the story is that all the old women are grotesque; none has aged well. Theroux is asked this question in the Q&A with Paul Theroux and his answer is that they are the Furies and so must be grotesque. (It does seem to suggest that all women age this way, though, so I imagine he’ll take some grief for this.) And Theroux sees Testa as more victim than anything else, but I don’t see it that way. His behavior with these women from high school and college and beyond was bad. There’s no getting around it. And he’s paying the price for that now, so the story is somewhat satisfying (if transparent) for that. But he’s no victim.