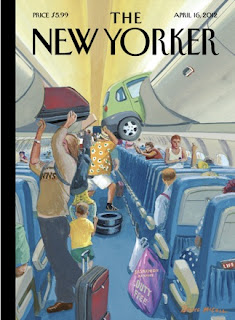 April 16, 2012: “Transatlantic” by Colum McCann
As fans of Colum McCann know, the man likes to blur the lines between fact and fiction. Think of the tightrope walker in Let the Great World Spin. In this story, the two pilots who make an early Transatlantic flight are real historical figures, although other characters are invented.
But as I was reading the story, I didn’t know that. I suspected it—having heard McCann speak on the subject of fact/fiction just last weekend—but still didn’t know how the story would end. Midway through the reading, I began to worry that there were only two possible endings. After all, the two pilots at that point were half way through this dangerous journey and it wasn’t looking good. If they succeeded, that was going to be anticlimactic. Heroic, but boring. If they failed, that was going to be anticlimactic as well. There didn’t seem to be any good way out. History tells us that they succeeded, but, fortunately, the story doesn’t quite end there, and McCann pushes things a bit further. The pilots land on Irish soil and are met not only by British soldiers but by villagers coming from mass. The point has already been made that the airplane is a converted bomber—a wartime tool being converted to other purposes, and this, it seems, is where McCann has taken the story, and may also be where he is going with the new novel.
This is the “miracle of the actual,” a line from the story and one that I think he must have used in our seminar last weekend, although I can’t find it in my notes. It’s taking the real and boldly pushing it further. I highly recommend reading the Q&A with Colum McCann, which sheds further light on his approach. It also reveals, which wasn’t obvious to me, that this is actually a version of a chapter in his new book.
In my opinion, the best of the year so far.

1 thought on “>The New Yorker: "Transatlantic" by Colum McCann”