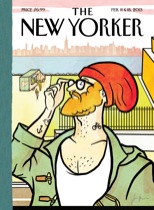 I have mixed feelings about this story. On the one hand, I like the character of Fatou, an immigrant from the Ivory Coast who is working as a maid for a Pakistani family in London, and the difficult position she’s in makes for compelling fiction. I also like very much her observation of the Embassy of Cambodia as she passes it each week on her way to the pool for her swim. On the other hand, the point of view from which the story is told seems wrong for this story. Smith has chosen the “tribal” perspective—third person plural—as if the people of this neighborhood would even notice Fatou, much less understand what’s going on in her head. There’s a certain amount of back and forth between the third person plural and a more traditional third person account of Fatou’s consciousness, but then there are places where the two are mixed. It just seems odd to me.

As Smith explains in the Q&A with Zadie Smith, the structure of the story follows the badminton game—21 sections, 21 points. They’re each labeled by a score: 0-1, 0-2, 0-3, and so on to 0-21. This suggests that one of the player scores no points. Is that Fatou? Perhaps, because she doesn’t seem to be doing too well, although she is getting some help.

Fatou has had it rough. Her father got her out of Ivory Coast and into a hotel job in Ghana when she was younger, but a hotel guest raped her. She then moved on to a job in Rome, and now London. But she’s treated terribly by her employers—she doesn’t even know how badly they treat her because she’s heard of girls who are treated worse. She has a Nigerian friend, Andrew, who speaks to her of his faith and also of the inevitability of suffering. (Andrew is an odd sort, and full of some bad information.) One of the things that is interesting here is the discussion of genocide—the Holocaust, the Khmer Rouge, Rwanda. Definitely worth considering and discussing further.