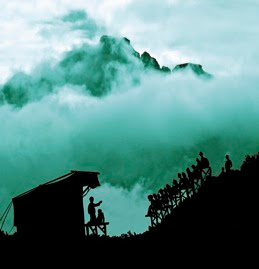 Anyone who has read Daniel Alarcón’s Lost City Radio will, I imagine, recognize the style and cadence of this story. Like that novel, “The Idiot President” is set a vaguely rendered South America against a backdrop of a conflict that has receded into the past. Here, a young actor wins a part with a small troupe that tours the countryside with a satirical play about the president. The other actors are old activists, it seems, sympathetic to the plight of the workers and village peasants. But times are better now and the young protagonist is soft, not up to the rigors of the road. They do have one memorable performance lit by the halogen lamps of miners’ helmets. Even though their show hits a rough patch, the audience by the end is enthralled. After the tour, the young actor leaves the company. He had plans to emigrate to the U.S., but those fall through and he now is optimistic that his acting career—he has an audition for a soap opera—will take off. And so it may. Like the memorable performance, like his whole country, there has been a rough patch but now things are better.

Is that the point of the story? And if so, what was that about Tania, to whom one of the other actors had been married and the other related. Why is it relevant that the play is performed at high elevation, and that the protagonist has a cold and then altitude sickness? I suppose I could construct an explanation, but the story doesn’t resonate enough in the end to justify the expectation of symbolism. Or does it?

I’d love to hear other views.