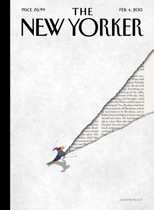 I don’t think there’s any need to wrestle with the meaning of this story—the author spells it out nicely in the Q&A with Nicole Krauss. Basically, it’s about the “burden of emotional inheritance” in the Jewish religious tradition, which in some ways is not all that different from any other religious tradition. The theme is revealed through the story of Brodman, an old Jewish scholar who is considering the question in the face of his own nearly fatal illness. As he recovers, he witnesses the birth of his grandson, who will continue the inheritance. The story is somewhat enriched by Brodman’s interactions with his wife and daughters, who all have different views on these subjects.

So the theme is interesting and the story is worth rereading because of it. But what do we think of the structure? There’s lots of backstory here that slows us down. Way down. He’s in the hospital, but we have to hear about his father and mother and then also about his relationships with his daughters. These things are important to the theme, though, so perhaps it was necessary for Krauss to go backward in this way.

I found the ending to be . . . frightening, and something of a surprise. A strong ending, I thought.