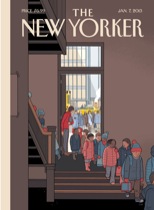 Read the Q&A with Rivka Galchen to understand the “seed” of this story, although that’s not particularly necessary in order to understand the story itself (which, by the way, is NOT behind the paywall, so you can go read it now, if you haven’t already).

We begin with a funny, tone-setting first line: “I was at home, not making spaghetti.” What a great way to establish this narrator’s voice and to begin to define her. And then by trying to explain why “not making spaghetti” is significant, she devolves into a wonderful digression about being unemployed, trying eat less, because . . . and then her digressive train of thought is interrupted by a phone call.  The caller I.D. says “unavailable” and she usually doesn’t answer such calls—I can relate—but on a whim she answers this one. I can relate to this, too.

The call is hilarious. It’s obviously a wrong number as the caller launches into his order for delivery, garlic chicken, etc., and the narrator promises delivery in 30 minutes. Which shows pretty clearly, if the opening digression hadn’t made the point, that this narrator is coming unglued.

She digresses some more and rambles, and there’s another call. The reader and the narrator both assume it’s the previous caller, but it’s not. It’s her husband. Husband? It’s something of a surprise that she has a husband, just as it’s going to be a surprise that we find out the career that she’s unemployed from is that of environmental lawyer. The husband wants her to go look for his lost wedding ring—uh-oh, is there trouble in the marriage?—but she doesn’t want to go look, and, funnily enough, he suggests that she go and “not look for it.” He may realize that she’s good at this. And his tone suggests that he realizes how close to losing it this woman is, so she’s temporarily mollified.

This time when the phone rings it’s the guy who placed the garlic chicken order, but she still doesn’t tell him he has the wrong number. Instead, she hangs up and goes to look for the ring, which the husband thinks he lost in a nearby park. She doesn’t find it, but she does have a day-long digression. When she returns home, the husband gently confronts her about the secret she’s been hiding and discloses that he’s found 3 severance checks for her. (She had claimed she quit her job.) And he points out what we already know—that she’s lost it and is just drifting.

And the story comes to an end, with her wondering.