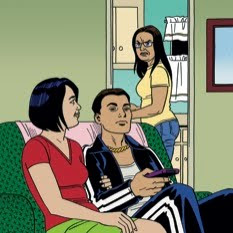 Yunior, who is still in high school, lives with his older brother Rafa and their mother. But Rafa has leukemia, and has been spending a lot of time in the hospital. Meanwhile, Yunior gets high a lot, and the mother spends time with her religious pals, the “Four Horsefaces of the Apocalypse.” When Rafa comes home, he doesn’t take care of himself. He goes out partying, gets drunk and high, and brings women home, all over the mother’s objections. He even spends some time with his old girlfriend, Tammy, who is now married to a white guy. But nothing happens between them, which suggests that he really cares for her—unlike the other girls he brings home. After a relapse, Rafa seems to settle down. He takes a job in a yarn shop, but after a few weeks he collapses and is brought home to recover. Which is how he meets Pura, who was in the shop when he collapsed. Pura is from the Dominican Republic and the mother doesn’t trust her, thinks she’s only out to get her green card, but Rafa won’t listen to her.  Shouting matches and estrangement ensue.
The plot here isn’t special, and even the setting is somewhat familiar. But the reason you should read this story is for the voice of Yunior, a jumble of Spanish and English and hybrid slang.

“O.K., for the record, I didn’t think Pura was so bad; she was a hell of a lot better than most of the hos my brother hand brought around. Guapisima as hell: tall and indiacita, with huge feet and an incredibly soulful face, but unlike your average hood hottie Pura seemed not to know what to do with her fineness, was sincerely lost in all the pulchritude.”

Pulchritude? Yeah, Yunior uses words like “pulchritude.”  So the voice is great, and the plot is good too—slightly familiar but compelling because of the setting.
This one is recommended.