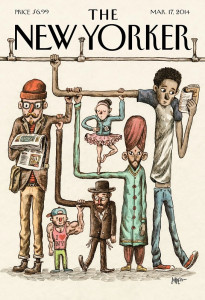 I’ve never been much of a T.C. Boyle fan, as readers of my New Yorker commentaries may remember. I have to say, though, that this story grabbed me for both its voice and its inventiveness. Normally, flashbacks can ruin a short story, but here, because of the Relive Box, the flashbacks are the whole point. And I wonder if, on some level, that’s what Boyle is saying.

In any case, Wes is the father of Katie, a young teen. Both of them are wallowing in a happier time when Christine, Wes’s ex-wife and Katie’s mother, still lived with them. And “wallow” is the right word, because both seem to be addicted to the Relive Box, a futuristic device that replays a person’s past based in a retinal scan. In Wes’s case, at least, the past is relived over and over again, not only his past with Christine, but also his relationships before Christine, and even back to traumatic childhood events. And he’s truly addicted, to the point that he’s in danger of being fired (although he suspects that his boss and co-workers have similar problems). When Katie goes away for a ski weekend with a friend’s family, Wes dives into his past so deep that he might never come out.

What’s Boyle saying here? We are a product of our pasts—the day we learn that our dog died, the day we break up with the girl we’re in love with, etc. But he also seems to be saying that living in the past is a kind of death, or at least paralysis. Get rid of that Relive Box. Live in the present.

And here is the brief Q&A with T.C. Boyle. It’s not helpful for understanding the story, but it’s amusing.