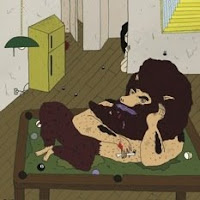 I’m at a loss to explain this story, although I enjoyed reading it for the suspense. So I welcome (invite!) anyone to offer an interpretation.

The best I can do is provide some background. In classical mythology, the Minotaur was a monster with a bull’s body and a human head who was kept in a labyrinth from which no one could escape unassisted. He was fed human victims. But along comes Theseus and with the help of Ariadne, daughter of the king, slays the Minotaur and also finds his way out of the labyrinth. (Thank you, Bulfinch’s Mythology.)

We also need to understand the ziggurat, the ancient temple-towers of Mesopotamia that resembled pyramids and are associated with the Tower of Babel.

So here’s O’Connor’s story: the Minotaur has been hanging out in the “pine-panelled section” of the Labyrinth lately (making it sound like a bar, complete with a pool table and a beer-stocked fridge) and there’s a new girl there (new girl, as in one of the sacrifices offered to the Minotaur). She’s playing video games in the corner–Ziggurat, Panic, and U-Turn–which all turn out to be games of disappointment in which God, or the gods, frustrate human ambition. The Minotaur grows fond of “the new girl” (I like her, too, because she tries to avoid her fate by asserting her non-virgin status; it turns out, though, that the Minotaur doesn’t know what a virgin is and can’t taste the difference.) For whatever reason, the Minotaur does not eat the new girl. He also has never tried to escape—he doesn’t know there is a world outside the labyrinth until the girl tries to tell him about it. The story suggests, however, that the outside world is something that she has merely imagined, because in fact her memories are of a world inside the labyrinth.

And yet, one day the new girl disappears. The Minotaur looks for her. He builds a ziggurat, expecting that he can reach the sky. When he gets there, he discovers that the sky is made of plaster. (Did that not remind you of The Truman Show?) And he breaks through only to find himself back in familiar territory—but then it’s a labyrinth, and so that’s what we’d expect.

The Minotaur has dreams (at least I think they’re dreams). And he continues his wandering. Until he is a tiny speck.

I think we’re dealing with issues of the maze of our memories, creating worlds from which we cannot escape. Beyond that, I’m pretty much stumped here. Thoughts?

12 thoughts on “>The New Yorker: "Ziggurat" by Stephan O’Connor”