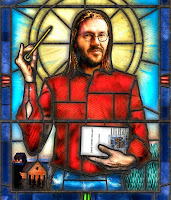 I’m prepared to accept that David Foster Wallace was a genius. I’ve only read short pieces by him, but I am convinced I should read Infinite Jest sooner rather than later.


But I don’t know if I’ll ever read Pale King, his posthumous novel, and one reason NOT to read it is that this review in the April issue of Esquire magazine says that I should.


I’m glad Esquire has a book review, but this one needed an editor. I don’t know who Benjamin Alsup is, but surely there is an editor at the magazine who could have told him that this sentence makes no sense: “But perhaps you could care less about citizenship.” What Alsup means, of course is, “But perhaps you couldn’t care less about citizenship.” After that, I can’t take the review seriously. And since he insists I should read the Wallace book, I can’t take that seriously either.