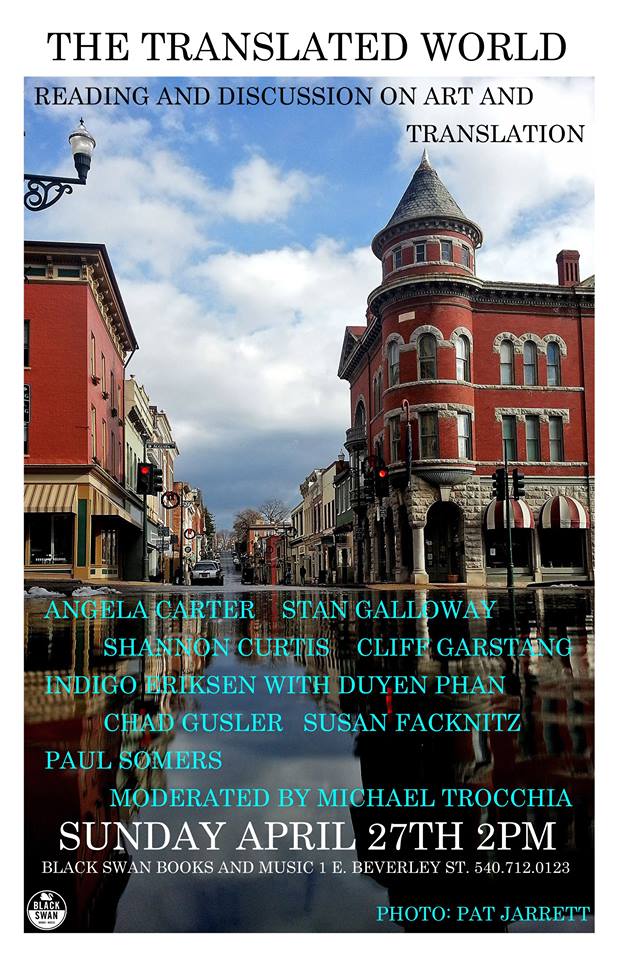 I had the pleasure this past weekend to participate in a terrific program at Black Swan Books & Music, a local store specializing in used and rare books and records. “The Translated World” was put together by a local writer, Michael Trocchia. Michael invited eight other writers from Staunton and Harrisonburg to talk about translation–what it is and how they use it in their work.

First up was Angela Carter who undertook an interesting project that involved someone observing her and commenting on her behavior, then her translating what the comment suggested, and then her writing a poem in response. The result was fascinating. She also talked about cultural translation in the sense of how she adjusts her own southern accent depending on her audience.

Next was Stan Galloway, another poet. Stan also took a varied approach–some literal translation work but also some translation of a different kind.

Shannon Curtis, a fiction writer who has lived in both the north and south, also talked about cultural translation, and said that she’d like to write a southern novel for a northern audience–a translation of Faulkner.

Then I was up, last before the intermission. I’ve done a lot of different translation work, including translating a Wang Wei poem (that 19 other writers translated in the fascinating book 19 Ways of Looking at Wang Wei). Then there is the translation of cultures in my book WHAT THE ZHANG BOYS KNOW, in which I drop a Chinese family into Washington DC. I spent most of my time talking about my short story “The Nymph and the Woodsman,” a story that began life as my translation of a Korean folktale of the same name. That story is in my book IN AN UNCHARTED COUNTRY.

After an intermission we heard from Indigo Eriksen and Duyen Phan. Indigo gave a “mini-lecture” on translation and then read some work accompanied by Duyen’s musical “translation” on a Vietnamese instrument, the đàn bầu.

Chad Gusler was next. Chad reflected on the fact that he often writes from the point of view of female characters in his fiction and he read some examples.

The poet Susan Facknitz was next and she read poems about translation and also some translated poems.

Last was Paul Somers who read several poems that touched on translation in one way or another.

The program was very well attended–standing room only–and although it went longer than the scheduled 2 hours, I loved it. Let’s see if we can’t put together more topical programs like that in the future.