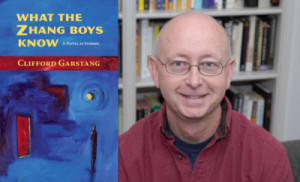 Despite the best efforts of my publisher, Press 53, and my own due diligence, my book WHAT THE ZHANG BOYS KNOW received few serious reviews when it came out in 2012. It was mentioned on quite a few blogs (as part of a “book blog tour” I arranged), but for the most part these commentaries did not really include reviews. Even after the book won the Library of Virginia Award for Fiction in 2013, it garnered little attention.

It is a pleasant surprise, then, when more than two years after publication a review does appear. This one is at “Peace Corps Writers,” a component of a website called “Peace Corps Worldwide.” The review, by Jan Worth-Nelson, is here.

Peace Corps Writers, which began as a print publication, has done a wonderful job of highlighting the work of the very many Returned Peace Corps Volunteers who have become writers. Among other things, it sponsors the Maria Thomas Fiction Award, which my first book, IN AN UNCHARTED COUNTRY, won in 2010.