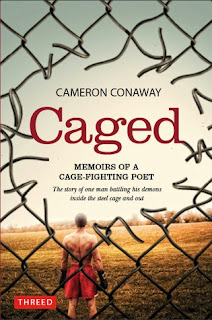 Caged: Memoirs of a Cage-Fighting Poet

Cameron Conaway
Threed Press, 2011
Cameron Conaway is a poet (a book and a chapbook forthcoming in 2012 from Salmon Poetry and Finishing Line Press) and was, for a time, a cage-fighting mixed-martial artist. He is also the sensitive son of an abusive father. And that triple-threat combination has resulted in this suspenseful, inspiring memoir that is partly a guide to health and nutrition and partly encouragement for all who might find solace in literature for the challenges that life presents.
Conaway’s story is, in some ways, familiar. When he was a kid, his father, as Conaway portrays him, was an angry man–intolerant, often verbally and sometimes physically abusive. Divorce was inevitable, but that seemed to make things worse for Conaway, who was perpetually torn by his admiration for his father (an accomplished martial artist) and hatred for the way his father often treated him. Despite the mistreatment, Conaway craved his father’s approval, and that craving pushed him to succeed. The family situation came to a head when Conaway tried to protect his younger sister from their father’s abuse; that clash ended their relationship.
How Conaway then channels his conflicted emotions is the real story here—he turns in a big way to physical training and sports. Fond of basketball, his height keeps him from getting the playing time he desires in organized ball, and yet pick-up games on the playground provide valuable lessons about competition, adversity, and battles against opponents often much larger. Eventually he discovers martial arts—his father’s discipline—but takes it a step further. Instead of the less practical versions of the sport, he would focus on real fighting: “The art of [Brazilian Jiu Jitsu] gave me the confidence that I could not only protect myself and those close to me, but gently kick the shit out of somebody if need be.” This growing confidence, not surprisingly, has implications for other aspects of his life.
In college, he discovered both academic discipline—his advice here is especially worth noting—and poetry. His first poetry teacher exposed him to the practice of observation—seeing both the forest AND the trees—and he was hooked: “The way I loved [Brazilian Jiu Jitsu], I loved poetry. The goal of poetry seemed to be to show new ideas and perspectives that broadened and deepened human understanding of each other and the world.”
So, while also working as many hours as he can in order to support himself, he pursues both poetry and mixed martial arts (he adds other styles to BJJ in order to have as many tools at his disposal as possible) in a big way. He participates in cage fights (traveling to Ohio, because the practice is illegal in Pennsylvania), and in the book the descriptions of these fights are as suspenseful and exciting as any I’ve read. He also earns a spot in a top MFA program to further develop his creative writing skills, and begins to teach in order to share his love of both MMA and poetry. Along the way, despite the commitment problems you might expect in someone from his background, he falls in love.
It’s truly an inspiring story, highly readable (Conaway includes some of his own poetry that reflects both his family life and his pursuit of martial arts), and I whole-heartedly recommend it to all readers.
But that’s not the only reason I wanted to write this review. Conaway has been working on this memoir for some time, and he landed a publishing contract with a major publisher in the field of martial arts. He was thrilled, as anyone would be. The book progressed through production and was scheduled for publication. And then the publisher pulled it from their list because of a threatened lawsuit—one that they knew they could win, but didn’t want to spend the money to fight. After exploring his options, Conaway has gone ahead with the book—a typically gutsy move—and I’m proud to support his effort.

1 thought on “>Book Review: Caged: Memoirs of a Cage-Fighting Poet by Cameron Conaway”