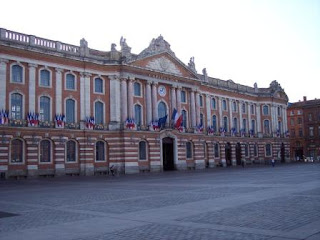 Man, it’s hot. It was a pleasant enough morning when I started out just after breakfast, but it warmed up fast, and the sun never faltered. I started out at the Capitole, the big square where lots happens. The other three sides of the squares have shops, cafes, and hotels, and there were also vendors in the square this morning selling crafts, some clothing, and fruit. 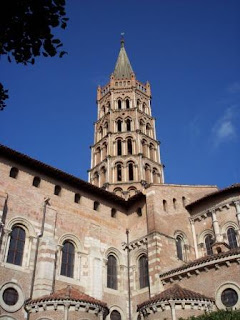 From there I headed north along a narrow road–most of the roads are quite narrow–to the great Basilica St. Sernin, which was consecrated in the early 13th Century (a bit before Notre Dame). It’s a beautiful building in a quiet neighborhood. I was there a bit too early to visit the archaeological museum next door that houses some of the Romanesque art and early Christian and Celtic artifiacts, but I hope to get there before I leave the city on Monday.

From the Basilica I walked toward the river, crossing the Garonne on one of the many bridges that connect the two sides of the city. I was on my way to Les Abattoirs, the old butchery that has been converted to a modern art museum. But the museum is on summer hours, and I was early. 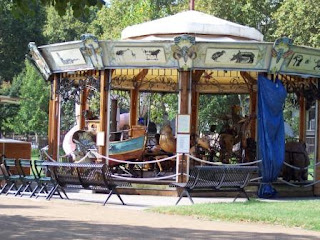 So I strolled around some–my feet were already hurting and I was already pretty damp–and found a shop where I could buy some cold water. I sat in a park near the museum–in the shade–and watched a unique carousel that attracted quite a few young children. Called “Le Beau Manége,” the seats were all fantastic sculptures. This picture doesn’t really do it justice, but take a close look. 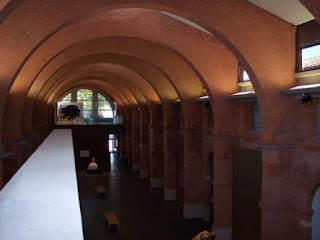 And then it was time for the museum Les Abattoirs to open. At €7 it was a little expensive, I thought, but it’s a beautiful building and there is some wonderful art on 3 floors, including a massive Picasso. (Click on the museum link to see the Picasso.)

From there I walked back across the river on a different bridge, got turned around a little in the Old Quarter of the City, and made it back to the hotel to take a rest, although along the way I spotted some things I want to take a closer look at later.

After a siesta, I headed over to the train station so I’ll know where I’m going on Monday, figured out where the hotel is where I booked for my last night in France–nothing fancy, but close to both the train station and the shuttle bus for the airport. And on the walk back I was so hot, hungry, and thirsty that I was desperate for ice cream of all things. I found a vendor in one of the little parks and sat and enjoyed a wonderful cone. (Actually, it wasn’t wonderful, and at €2 wasn’t cheap either, but it did the trick and cooled me off nicely as I sat in the park and ate.)

I had thought I might make a day trip out of Toulouse, but given how hot it’s going to be on Saturday and Sunday, I think it’s going to take both of those days to see everything I want to see here. Plus I’m feeling like I might want to get working before I arrive at the residency on Monday. We’ll see . . .

1 thought on “>Hot Times in Toulouse”