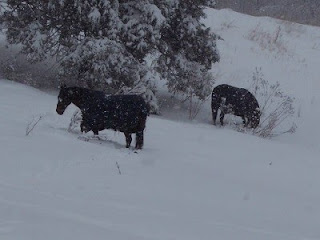 It’s very near the end of my residency (VCCA shuts down for Christmas on the 22nd) and it seems as though we’ve had a busy few days.

A few nights ago, Fern Seiden gave a presentation in the studio–a short film called “Air Intoxication” that she made for Swedish Television. The film was full of great images, some of which she got from the Swedish Television archives.

Last night we had a short reading by Janie Miller and Ruiyan Xu. Janie read some poems, including several that she’s been working on here at VCCA, and Ruiyan read from her novel, The Lost and Forgotten Languages of Shanghai.

On Thursday night we heard two short essays read by Lori Horvitz–here’s an example, although this isn’t what she read: The Girls of Usually. And we also heard several poems from Rachel Hadas. That was especially fun because one of the poems she read is in the anthology I teach from and I plan to add it to my syllabus for next semester.

But now it is Sunday night and because we all leave on Wednesday we had a final reading tonight: Kristen-Paige Madonia read from her as-yet untitled novel, due out in 2012, and Natania Rosenfeld read several short poems and a short essay. Nice!

And now I’m back at work. I think that was the last reading–several of the visual artists are having open studios tomorrow afternoon . . .