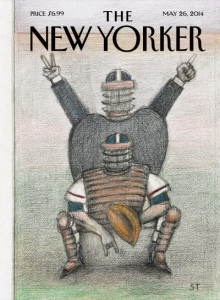 In this story, the narrator is a young boy when his father’s godson comes to visit for the first time. The godson, Camilo, is the son of Big Camilo, an exile from Chile who is estranged from the narrator’s father. (As it turns out, the estrangement is because of an argument about soccer, about which everyone seems quite passionate, except the younger Camilo.) Young Camilo visits often and also saves money so he can go visit his father in Europe.

Camilo is like an older brother to the narrator, helping him to overcome his shyness, teaching him about girls. Eventually, Camilo does go to Europe.

Many years pass, and now the narrator is visiting Europe. He meets up with Big Camilo, who sends his apologies to the narrator’s father concerning their old argument.  It is then that we learn that Camilo, soon after his visit to his father, was killed in an accident in Chile.

The story makes frequent reference to the political situation in Chile. Big Camilo had been arrested, beaten, and then allowed to leave the country. Everyone seems unable to really express themselves, which perhaps is why they are so passionate about soccer, and why young Camilo, who has no trouble expressing himself, doesn’t seem to care about the sport.

From the Q&A with Alejandro Zambra we learn that the character of Camilo is based on the author’s father’s actual godson, and that he really admires the character—an interesting way of speaking of a fictional creation.