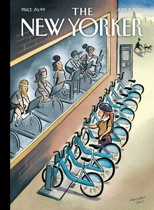 In the Q&A with Akhil Sharma we learn that this story was meant to mock a real person who, apparently, offended the author for the way he behaved at a funeral.  (Although Sharma doesn’t know the fellow’s name, someone really should go to India and find him, and maybe sue Sharma? What an absurd thing to say to the New Yorker. Isn’t it?)

Anyway, the story is a little odd for other reasons. The narrator is a kid—8 when the story begins—who is watching his cousin Manshu, about 6 years his elder. Manshu’s father is dead and then his mother dies, and Manshu moves in with an uncle. But he spends most of his time at the local temple, which he eventually takes over as the temple pandit (or pundit, as the New Yorker uses in the Q&A). Manshu marries outside of his caste, to the consternation of the local people, including the narrator’s father. When the narrator’s father dies, Manshu behaves oddly. Among other things, he takes a cell phone call during the rites. Much later, when Manshu’s wife dies, the narrator is compelled to help him arrange the funeral, even assisting—against custom and to his horror—with the spreading of the woman’s ashes in the river.

The story, then, is about death and about the rituals we follow in honoring the dead. The narrator is offended by Manshu, but Manshu says he is being modern by introducing the idea and a eulogy into a Hindu funeral. And who cares if he answers his cellphone. Similarly, what difference does it make who scatters the ashes in the river? I suppose that’s really what the story is suggesting.