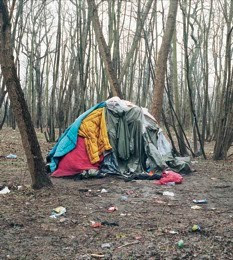 I suppose it’s possible to write an original, successful dystopian story, but this one doesn’t work. Or maybe it does exactly what it seems to be trying to do—show the consequences of ignoring global warming. In this story, an English couple in 2040 are struggling to survive—food and fuel shortages, foul weather, billeting of foreign refugees and troops—in the aftermath of the collapse of government, which in turn was caused by the Big Melt. Fearing for their lives and unable to put up with conditions, they flee north. Life on the road’s not so good either and the man is killed by another foreigner, who gets the narrator pregnant. The worst thing is to bring a child into this world and so the narrator has to take action, against the man first.

We’ve all read The Road. I don’t see that this adds anything to the equation except the female perspective including the problems of giving birth. If anything, this is bleaker than McCarthy’s bleak novel. And if it is meant—since it came out during the Copenhagen summit—to be a call to action on global warming, it’s too easily dismissed as fantasy, even though it seems all to plausible to me.

7 thoughts on “>The New Yorker: "Diary of an Interesting Year" by Helen Simpson”