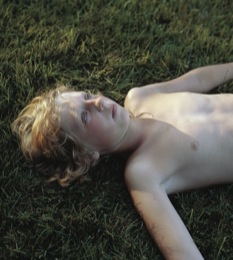 I like Millhauser’s work, and this is well done as far as it goes, but it doesn’t make for much of a story. Not to mention that it seems geared toward much younger readers than the usual New Yorker Story.
The point of view character, Jimmy, is nine. His older sister is thirteen. The family has gone on a day-long adventure to a sandy beach on a river, which for Jimmy is heaven: floating on an inner tube, eating a hot dog, lying in the sun. It marks both the real beginning of summer and its highpoint. But the real pleasure in the day is in the anticipation, and Millhauser drags this out for as long as possible. Everything is about Jimmy getting closer and closer to the beginning of this glorious day, which is the moment when he gets in the river. Now, as it happens, he’s also somewhat afraid. He can’t swim, and so the fact that his older sister is swimming in the river is something of an embarrassment. But he’s just a kid, and he’s growing up, and so he “begins his day” by entering the river.
Okay. It’s interesting to think about what’s going on in Jimmy’s head. Or maybe to speculate about the symbolism represented by the river. But beyond that, I don’t think this one is terribly memorable.
January 3, 2011: “Getting Closer” by Steven Millhauser