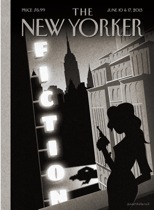 This might be my favorite piece in the issue. The story begins: “Forty-one years ago, my uncle Hector said he was hitchhiking to Spokane, walked out the door, and disappeared.” Nice start. So what became of uncle Hector? The narrator spends the story speculating, and along the way recounts other losses the family has experienced. But he decides it’s time to “bury” Hector, so a memorial is planned and held, with an open, empty casket. Was Hector a great man? “Actually, Hector was only sometimes great. But we need to make the dead better people than they were, because it makes us look better for loving them.” (This is the kind of simple, almost child-like logic that Alexie is so good at.)

The reason this story fits into the summer crime issue is that the narrator speculates that Hector has disappeared because of foul play. But of course he doesn’t know, and no one knows.