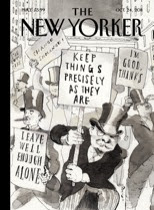 October 24, 2011: “Sun City” by Caitlin Horrocks
I think I liked this story more after I read the brief Q&A with Caitlin Horrocks in which she talks about her own discoveries about the characters while writing the story, and the changes the story went through in drafts. The story is about Rose who has traveled to Sun City, Arizona after the death of her grandmother, Vera. We see Rose and Bev, Vera’s “roommate,” and much of the story is taken up with Rose’s interpretation of the relationship between Vera and Bev, which at first seems less than Rose assumed, and then, in a way, more.
And it is Rose who has come, rather than Rose’s mother, Vera’s daughter, because the two were estranged. In any case, Rose and Bev negotiate over the disposition of Vera’s stuff—costume jewelry, plates and dishes, furniture, her ashes—and the fact that there isn’t more to it is sad, especially because Vera’s estrangement with her daughter, and to a lesser extent her disappointment in Rose, is about her wanting them to want more for their own lives. It turns out she didn’t want much herself. In a telephone conversation, Rose’s mother tells her the one thing of Vera’s she might want to have, and I think this story misses an opportunity when Rose realizes that Bev has taken it. Rose’s choice of letting Bev keep it is fine, but I wish more had been made of the dilemma.
Alcohol has an interesting role here. Vera, at one point in her life, apparently drank a lot. Bev drinks, but kept it hidden from Vera, so as not to tempt her. Rose is a bartender, and also drinks. In the end, Rose displays her talents for Bev by mixing them drinks—an act that Horrocks explains in the Q&A.
It’s a good story, although maybe not a great one.