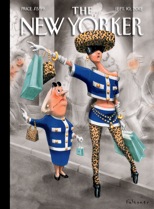 Mercifully short, the story is about a couple traveling to the wife’s parents’ ranch to celebrate the couple’s 25th anniversary. Along the way we learn that they never wanted children, that he’s a miser—they’ve saved and saved and so have a nest egg, and yet the drive a junker of a car, that they don’t seem to agree on much. In fact, it seems that the husband believes that his opinions are their opinions, but by the time we get to the ranch we know that he’s pretty much wrong about that. And then there is a surprise ending—Deborah Treisman in the Q&A with Thoms McGuane calls it an O. Henry ending, but McGuane doesn’t seem to know what that means—which I won’t reveal, but it has something to do with the story’s title.

Apart from the sociological commentary about the inheritance problems facing Montana ranchers, and the cute ending, which is a bit predictable, there’s not much meat on this story. As I say, it’s mercifully short.