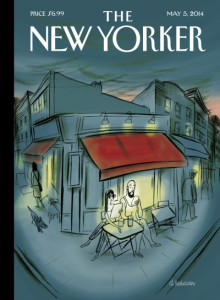 Caperton is a consultant (in what area isn’t exactly clear—landscaping?) but is on his way from his home in Chicago to Newark because his father is dying. He is seated on the flight next to a professional wrestler who says that his sport is all about storytelling, which is similar to something another consultant had said to him in a recent meeting, and Caperton finds this odd. Caperton’s father has claimed to be on his death bed before, but it seems to be true this time, according to Stell, the father’s current wife. Caperton meets his stepmother at the door when he arrives. They have a good relationship—his own mother is dead—but she has a problem with his rooting in the refrigerator, so of course he likes to do that just to get to her. The fact that the father really is dying, now seems to affect Caperton, and everything is about storytelling, which seems to be the point of the story. He tries to contact his ex to talk to her after the father does in fact die, but her current lover protects her from him. On the return flight, he is comforted by the pro wrestler.

Huh? There are some funny lines in the story, although I’m not sure the theme of “storytelling” really comes through for me.

The Q&A with Sam Lipsyte doesn’t shed much light on it, but there are some interesting comments.