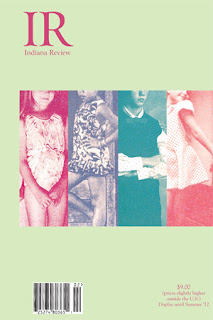 [This is the latest in my Year of the LitMag series. If you would be interested in doing a guest post in the series, let me know–leave a comment or send me an email–to let me know which issue of which magazine you’d like to discuss.]

Indiana Review has a reputation for being a little edgy, a market for stories that are unusual in subject, style, or form. This issue ought to confirm that rep.

The first story is “The Stolen Cloned Mammoth” by Shane Castle, about two competing biotech companies, one of which sends the other a cloned woolly mammoth. Chaos ensues. Then there’s Adam Schuitema’s “Gunplay,” which is the history of a boy’s relationship with his father, from cradle to grave, told through his connection to guns. It feels fragmented (which isn’t a bad thing, by the way–just ask David Shields), as does “Things to Do with an Open Wound” by Steven Ramirez, which is in the form of a list (each one amplified with an anecdote) of bad ideas. “Staccato” by Peter Tieryas Liu is also fragmented–as the title suggests. Liu is telling the story of a visitor to Beijing in a series of very short vignettes. “Palimpsest” by Kim Magowan tells of a series of sexual encounters that “don’t count” for various reasons. “The Creeper” by Briandaniel Oglesby is told in longer fragments. “Practice” by James Miranda is one short fragment–a flash–and Mary Hamilton has two very short pieces that also feel fragmented. The first one, “Fucking Birds,” is about Marco who “lost his face in Colorado” and “Marco” is the first word of each paragraph.

On the other hand, some of the stories are practically traditional by comparison, including “Pilanesberg” by David Guterson and “Beneath the Surface” by Amy Butcher. Guterson’s story is about a brother and sister (recovering from chemo) visiting a South African game preserve. Butcher’s is about a woman who’s boyfriend is called home because his cousin dying. Both are good, compelling stories.

“Sam and Annie: A Kind of Love Story” by Joe Wilkins is also more or less traditional in form. It involves a 10-year-old boy who is stalking Annie, a pretty prostitute, and struggling to deal with his father, who is both a drunk and a con-man. I’m not a fan of stories about kids, but I felt sorry for this one.

So IR seems to like offbeat, although they also publish stories that are somewhat traditional.

[This issue also has several fine essays and numerous poems that I’m not able to comment on.]