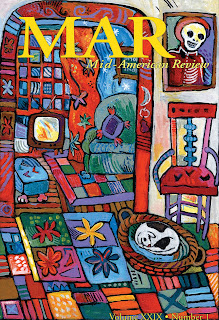 I subscribe to a lot of literary magazines and I’m hopelessly behind in my reading. A 2010 resolution that I intend to put into practice immediately is to read the journals as soon as they come in, PLUS one from the backlog. I haven’t finished with the one that arrived yesterday, so let me start this new LitMag Wave with the older number:

Mid-American Review, Volume XXIX, Number 1. This isn’t even the most recent MAR, but it’s the one I grabbed off the pile so it’s the one I’ve been reading, and I like it a lot. Starting with the striking cover by Judith Vierow. Inside, I enjoyed the winner and editors’ choices from the 2008 Fineline Competition: Ryan Teitman’s “The Cabinet of Things Swallowed” is a sharp piece of flash fiction about fourth graders on a visit to a museum. Love the ending. No wonder it won! There are also two pieces from Alan Michael Parker’s collection of flash fictions, from which he read at the recent Winter Wheat Festival of Writing sponsored by MAR. He distinguishes flash fiction from prose poetry and while I agree with his distinctions, these pieces seem to me to be more prose poetry than flash fictions. But no matter; I very much like what he’s doing with the Reports from the Committee on Town Happiness.

Also notable in this issue is the story by Matthew Eck, “Ward No. 6?” about a writer who is hired by a prestigious university on the basis of fabricated publication credits. (I’m looking forward to Eck’s novel, which I just “won” in Rain Taxi’s annual fundraising auction.) I also liked Becky Hagenston’s “Anthony,” which is an odd story about a young girl who is sharing her body with a ghost, and “Girl With Two Hearts” by Sumanth Prabhaker. All of these pieces are off-beat, and so is the final story, Baird Harper’s “Two-Twenty-Two” about a teenager’s visiting, cross-dressing cousin.

Not to mention poetry, reviews, and several fine essays. Congratulations to the editors for an excellent issue.